Escape from the Haven of Umbar is the second instalment in the series of short campaigns Unfinished Tales of Middle-earth. Here the events are retold from the point of view of Turamarth son of Ohtar, a nobleman and warrior from Minas Anor on a journey to meet his foretold doom face-to-face.

Continued from Part 2 and retells some events from The Tale of Years – Part 6.

The company was told that the journey from An Pharaz to the Free Traders’ hidden keep in the desert would take almost five days. The Haradrim guide they had hired consented to accompanying them for three days only, for he wished not to tread too far from civillisation. That was well enough for the Men of Gondor.

As they rode out on the roadless expanse upon their mules, Turamarth was seized with amazement at the vastness of the desert. As far as his eyes could see, great dunes rose like waves upon a sea, and they were radiant gold under the unobscured sun. The warrior of Minas Anor gathered his courage and held onto the hope that the path to Gondor lies past these dunes. He glanced at his companions and saw that some were more daunted than he.

During the day, the scorching heat bore down upon the company to exhaustion, and during the night, the cold air would only allow them a fitful sleep. They had bought waterskins in An Pharaz before journeying out and rationed water carefully, but game was not easy to come by in this barren land.

On the third day of the journey, when Turamarth rode ahead to see what lay ahead, he saw a contigent of forty riders coming from the north. Cirion son of Caragorn became certain that we spotted them too late, for surely a contigent of that size would have scouts of their own, who surely spotted the fellowship first. He spoke truly, for the riders appeared to be coming towards them. The guide became frightened and quickly turned his mule to the north — the opposite direction of where the strange men were going. The rest followed at his heels. The riders gave chase until dusk but eventually, they were lost.

After they found some brief respite in the darkness of night, the guide gathered his belongings and took his mule west towards An Pharaz in silence. He had completed his task and thus left alone the strangers from the North.

The following day, Gerold took up the role of the company’s guide once more. Although the remaining journey was brief, when they arrived at the gates of an old Númenórean keep in the shadow of the mountains that flanked Umbar to the east, their bodies were worn down, lips dried and stomachs empty. The Free Traders let the Men of Gondor into their hold and they were greeted by Naud, whom they once met on Iaun’s ship in the docks of Umbar.

They held council with Naud and presented to him what they had learned from A’mal in Kas Shafra. Naud looked upon the banner of Gondor and said, “What you had discovered attests to my suspicions. Nurmir, the chief captain of Teldurmir — who is a Captain of the Haven — plans to defect to Gondor in secrecy. My chieftain Iaun learned of this impending betrayal and attempted to blackmail him. However, instead of gold which Iaun desired, Nurmir sent his men after our own. I see only one way out of this wretched quandary: you must take this token of Iaun’s to Nurmir and convince him that you have killed him. If Nurmir is setting course for the north, then he is in need of Northmen to accompany him. In this arrangement, the Free Traders are safe and you shall be on your way back to Gondor.”

At this revelation, Gerold laughed. “This must be the greatest jest ever told!” he said. “For this entire time, we were running from the man who would take us to Gondor.”

Turamarth turned to his companions and spoke in Westron, which Naud did not comprehend. “If we agree to this scheme and sail northward with Nurmir, what comes after that? Shall we let this treacherous man pass freely into Gondor?”

“That is between him and the King’s justice,” answered Cirion.

Turamarth’s face turned grim once more. “But he may yet evade the King’s justice. I cannot leave this to chance. After his ship docks in Pelargir, we must slay him.”

Naud paid the members of the company with the gold he had promised. He assured Kolbeinn that his debts are forgotten, and he said to Turamarth, “I am sorry, but we could not find the information you were seking.” The warrior of Minas Anor nodded and accepted gold in its stead. Then, seeing the thin, weary faces of the company, Naud ordered for food and drink to be brought.

It surprised none when a servant barged into the room moments later, speaking of marauding riders at the gates, for misfortune had dogged them since leaving Kas Shafra. Turamarth quietly rose from his seat and drew Naerang from its sheath. 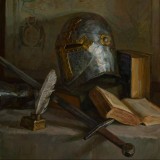